Whitney, my seeing-eye dog, and I visited a school on the North Side of Chicago recently, and for some reason, the first and second graders seemed particularly interested in color blindness. When one of them asked me if it’s true that dogs can only see black and white, I explained that dogs do see some colors, but they can’t tell the difference between red and green.

“If we’re at an intersection with a stoplight, it’s my job to judge when it might be safe to cross,” I said. I described the way I stand up straight, concentrate, and listen for the rush of cars. When it sounds like the traffic is going the direction I want to go, I take a guess the light is green and command Whitney to go forward. Whitney’s ears perk up; she listens for traffic and looks left and right to confirm it’s safe before pulling me across.

The students seemed satisfied with that answer and went on with other questions. Are you blind all of the time? When you were at the Seeing Eye school, what was your teacher’s name? Does Whitney like to lick a lot? What do you and Whitney do to have fun? Their thoughts eventually returned to colors, though.

One girl told me that her school uniform is red. “But does Whitney think it’s green?” she asked. I gave that question some thought and realized I couldn’t answer it. When I got home, I did some research.

When researching what colors dogs can see, I found that dogs can see colors, but not the same way humans do. People can see a rainbow of variations including violet, blue, green, yellow, orange and red. Dogs can only see blue, yellow, and some shades of gray.

Dogs would see a rainbow as dark yellow (sort of brownish), light yellow, gray, light blue, and dark blue. Dogs don’t see red, purple (violet), or orange like we do. So, while it is established that dogs see shades of yellow, blue, and gray, if a dog were to look at a uniform that is red or green, it would appear as faded brownish, gray, or indistinct. See the color chart below for an approximate idea of what colors dogs see best. 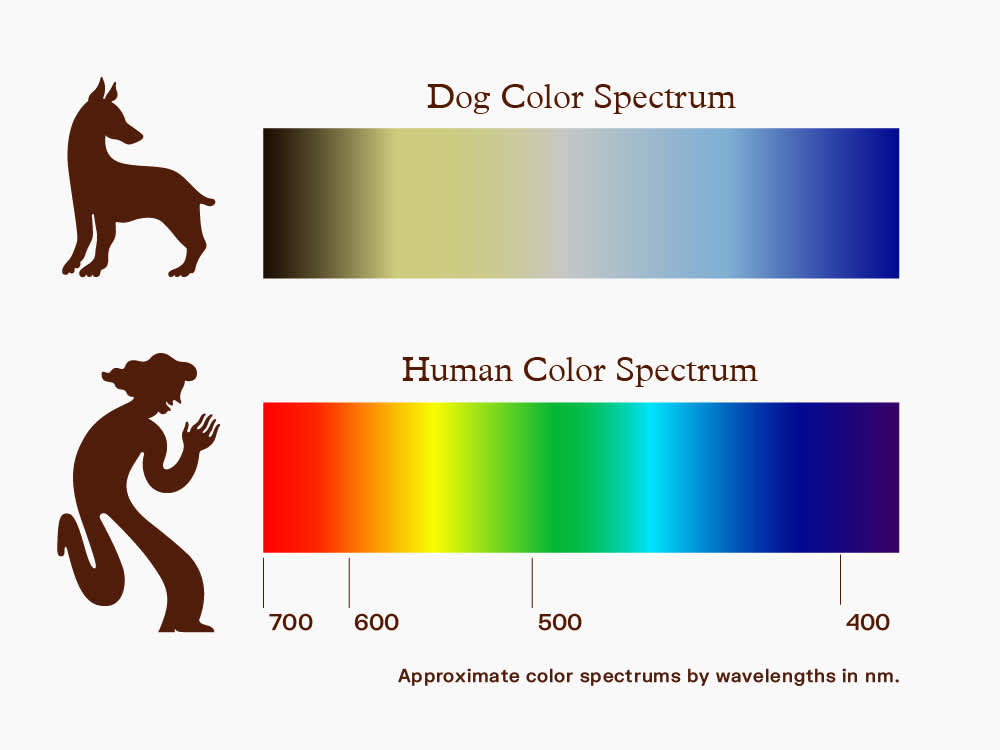 Dog eyes work much like a camera. Light enters through the pupil. The iris, a structure that can expand and contract, controls the amount of light allowed in. Light then passes through the clear cornea and lens, which focus the light on the retina, a light-sensitive layer. The retina contains color-sensitive cones and motion- and light-sensitive rods, all of which convert light into electrical signals. The cones and rods send these signals via the optic nerve to the brain, which constructs an image from them.

Dogs have only two types of cones, compared with the three types in human eyes. As a result, dogs don’t distinguish as many colors as people do.

But, can dogs see color? Yes, dogs see much more than just black and white. A dog’s vision is similar to that of the 8 percent of humans who are red-green colorblind.

Fun Facts About Dogs and Color:

Dogs do better at agility training when the weave poles, tunnels, jumps, and boards are painted in colors they can easily discern.

Dogs see 20/75, which makes them quite nearsighted.

The best dog toy color is…

Based on what we know about dogs’ color vision, the best color for dog toys is blue.

Vision in Dogs by P.E. Miller and C.J. Murphy, Journal of the American Veterinary Medical Association

How Pets See Your Home by HomeAdvisor